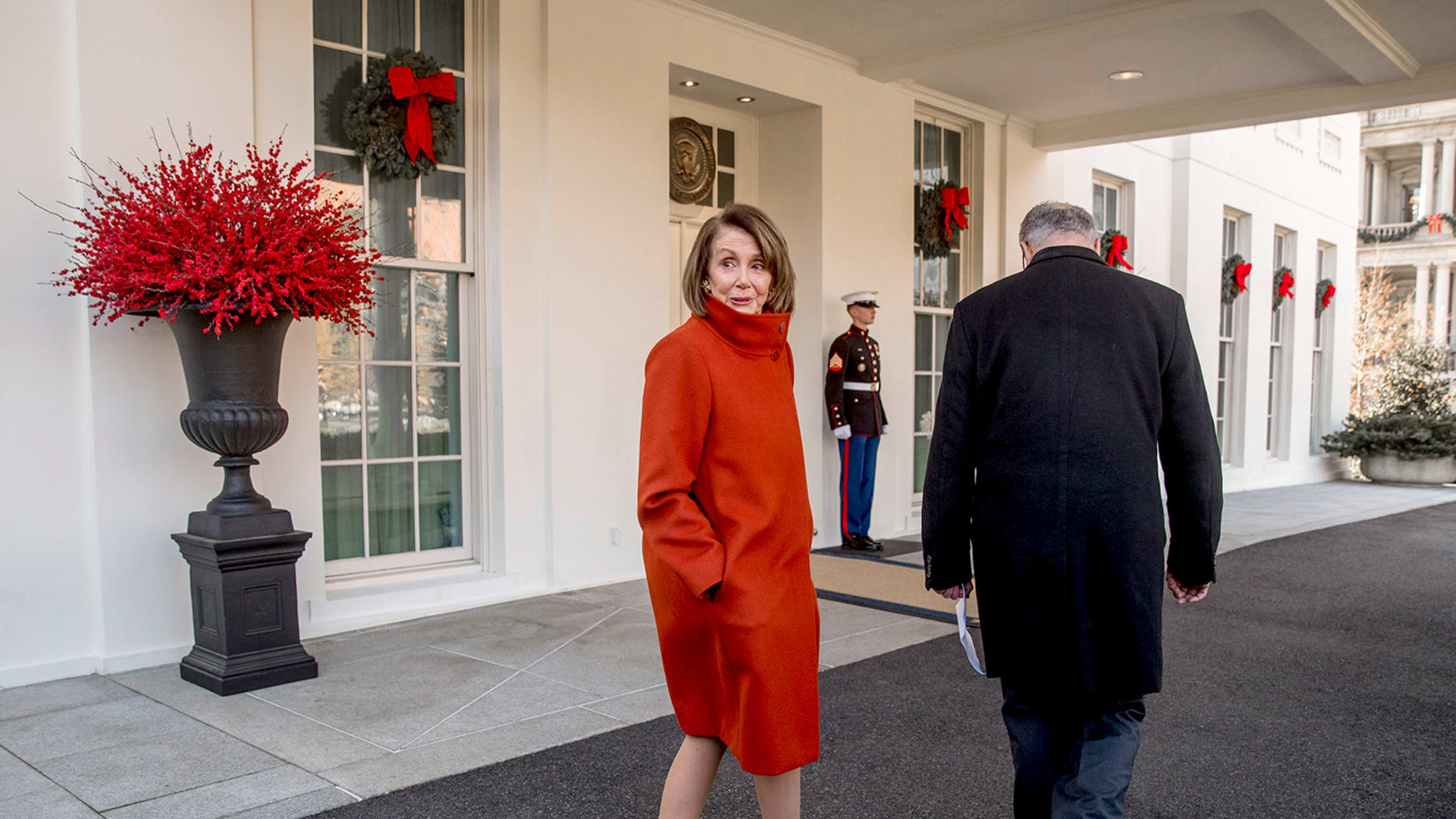 There are times in every successful designer’s career when they find something they created at the center of a viral sensation. For Max Mara’s creative director, Ian Griffiths, discovering that Speaker of the House Nancy Pelosi had ignited a global frenzy by wearing his red “Fire Coat” for her infamous showdown with Donald Trump in 2018 was one of those moments. It was not, however, quite as he had imagined it.

“It was 7 in the evening and I got the phone call from our American communications office. I had just got home from work and was in the middle of getting changed with my trousers around my knees,” laughed Griffiths on the phone from his office in Reggio Emilia, northern Italy. “They needed urgent confirmation the coat was ours, then more and more calls came in to give quotes. I spent the whole evening shuffling around my apartment with my trousers around my ankles because I didn’t have time to take them off!

“That gives you an idea of how out of the blue it was.”

The moment may have caught the down-to-earth Griffiths off guard, but Max Mara was hardly a leftfield choice for Pelosi, who had worn the same coat to President Obama’s second inauguration in 2013. The Italian brand, which is famed for its camel coats and marks its 70th anniversary this year, has always been about “making real clothes for real women,” said British-born Griffiths, who joined the label straight out of school in 1987 and has remained there ever since. 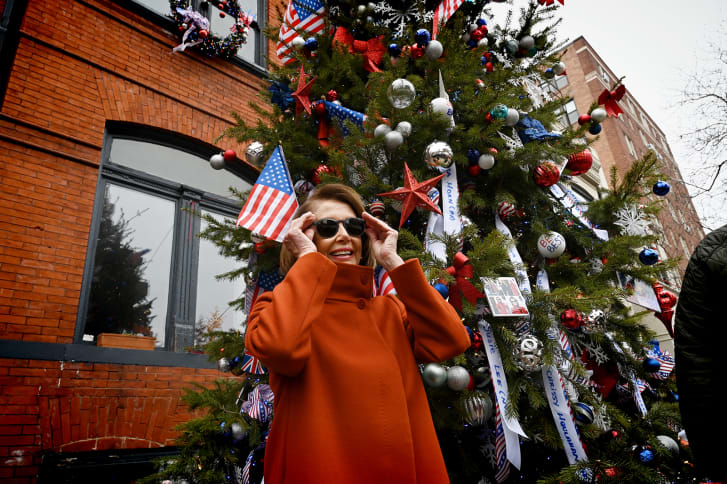 The designer recalled an early meeting with the brand’s late founder, Achille Maramotti: “He told (me) his intention was always to dress the wife of the local doctor or lawyer; he wasn’t at all interested in dressing princesses or countesses in Rome. He chose so wisely because over the last 70 years those women (have risen up) and Max Mara went with them. Now rather than the wife of the doctor, they are the doctor, if not the director of (an) entire healthcare trust. “

Griffiths can count Kamala Harris among the high-flying women who admire his creations. The US Vice President generated headlines for the brand last November when she was photographed wearing one of its grey military-inspired “Deborah” coats on the campaign trail in Philadelphia.

“She looked like a figure from the American War of Independence, with the flags in the background and raising her arm in the air … it was such a powerful image,” said Griffiths. With both Harris and Pelosi, he continued, “it appeared they were not simply wearing (the coats) as a utility, but in a way that really made a statement (and) as a vehicle to say something I absolutely agree with.” It was, he admitted, incredibly rewarding. 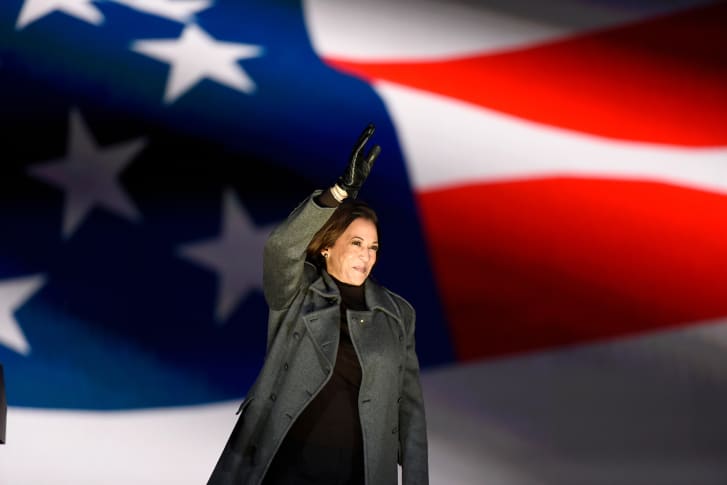 (Vice President Kamala Harris speaks during a drive-in get out to vote rally in Philadelphia, 2020. Credit: Michael Perez/AP)

Griffiths is acknowledging the brand’s landmark anniversary this year by paying tribute to strong, independent women like Harris and Pelosi. In keeping with Maramotti’s original vision, he may not be concerned with royalty per se, but he is intent on making clothes to empower women to rule the world.

It seems only fitting that Griffiths is helping Max Mara mark its 70th birthday with a special anniversary collection . Unveiled digitally at Milan Fashion week Thursday, the Fall-Winter 2021 line is as empowering as one has come to expect from the Italian label.

“Celebrating this tremendous event, I was thinking about the Max Mara woman as a triumphant self-made queen in a moment of jubilation at her ascent,” he enthused.

The digital presentation kicked off with behind-the-scenes images of a model being enrobed in a Max Mara coat before taking to the circular runway inside the Triennale di Milano. The imposing curved space, which reminded Griffiths of London’s Regent Street, was decked out in flags featuring symbols from the brand’s archive to give the flavor of a coronation or parade. Among the symbols was a retro exclamation point that the designer discovered on 1950s Max Mara advertising from the brand’s archive

The symbol “captures the entire spirit of the collection,” he said. “How (else) do you describe the sense of exhilaration and epic adventure of this 70-year ascent?”

Since its beginnings in 1951, Max Mara was obsessed with a love of all things “authentically — bordering on eccentrically — British,” Griffiths added. For this collection he looked to tractor-driving, helicopter-piloting, pioneering women by way of kilts (“traditional but also rooted in punk culture”); quilted coats made from pure camel hair; utilitarian jackets executed in sumptuous alpaca; organza shirts “which are dramatically jaunty”; and chunky socks and walking boots.

(According to the show notes, the collection is an “urban country-mix” with cocooning aran knits and slouchy tartan skirts.Credit: Max Mara)

It is a collection of “unconservative classics,” he explained, which is also an apt description of the designer himself. Part free spirit, part quintessential gentleman, Griffiths is a former club kid turned creative commander of one of the world’s oldest, most sophisticated luxury houses — and he has a charming penchant for pocket squares. Given that he spent most of the UK’s Covid-19 lockdown at his home in the Suffolk countryside, his collection’s bucolic inspirations appear all the more personal.

“It’s inevitable that a lot of my story goes into there,” he said, pointing to the recent pictures on his Instagram account. “Those images of my experiences being in the countryside over the summer, having long walks with my dogs, the way I used to dress 30 years ago, punk culture, the idea of an independent rebellious spirit, refusing to accept convention — they are all ideas that are central to my thinking. Primarily, (however), I channel it so that it appeals to the Max Mara woman, as it’s all about her.”

“It’s made me think very hard about who (she is) and appreciate even more greatly the struggles she has been through, which have been thrown into even sharper relief by what’s happened over the last year,” he said. “I want to show her emerging from this hardship triumphantly.

“It’s our 70-year celebration but it’s also a collection that’s timed for a moment next winter, 2021, when all over the world, restrictions will start to be lifted and people can enjoy the world they live in and celebrate.”

The upcoming collection is, he affirmed, a “double celebration, in a sense”. In Griffiths’ enthusiasm for design, sartorial expression and hope, Max Mara has much to celebrate, too.